This is the root topic for discussing cheminformatics, including the features of our Chem package.

The Chem package provides first-class cheminformatics support for the Datagrok platform. See it in action on YouTube. Given existing platform’s capabilities in rich exploratory data analysis, advanced data mining and out-of-the-box support for predictive modeling and scientific computations, this package turns Datagrok into a comprehensive platform for working with chemical and biological data.

Our goal in performance is to be able to open chemical datasets of up to 10 millions small molecules completely in the browser, and interactively perform commonly used operations such as substructure and similarity search without having to rely on a server. In order to hit these goals, we are using a couple of techniques. First of all, we are leveraging Datagrok’s capability to efficiently work with relational data. For cheminformatics, we are relying on the RDKit library compiled to WebAssembly. Not only this gives us the ability to execute C++ code at the native speed, but also enables full advantage of the modern multicore CPUs by running computations in multiple threads.

Here are some of the Chem features:

The following Chem features are still in the core, but we plan to move them out to this package:

Join our discussion here if you are interested in high-performance cheminformatics, and check what’s already available with the Chem package.

Chem 0.3 (Chem.0.3.0-8b678c) is released, providing for a number of great performance improvements and new functionalities.

All this is offered completely in the browser, without involving any server-based computations.

One area of particular interest for our users was the performance of substructure search. In fact, already with “naive” graph-based search, where we match the given pattern molecule to every entry of a dictionary in a loop using get_substruct_match, the performance was reasonable on small datasets. Yet, this wasn’t a match for the most typical use case, where many subsequent pattern searches are applied to a single dataset which changes rarely.

That’s were the RDKit’s substructLibrary comes in handy. It first allows building the so-called library, to which we perform further pattern searches against. Let’s look at some of our micro-benchmarking results of the discussed approach. We are taking a large dataset of 40 000+ molecules, and do a search for 3 small patterns written in SMILES: ['c1ccccc1' (Benzene), 'C1CCCCC1' (Cyclohexane), 'CC' (ethane)]. We linearly increase the dataset being sought through from 2’000 to 12’000 molecules and track the performance of these 3 searches altogether, averaged on 10 independent runs. For the input file demo/chem/zbb/99_p3_4.5-6.csv it is in the picture bottom, and for demo/chem/zbb/99_p1_ph6-8.csv it is in the picture top. 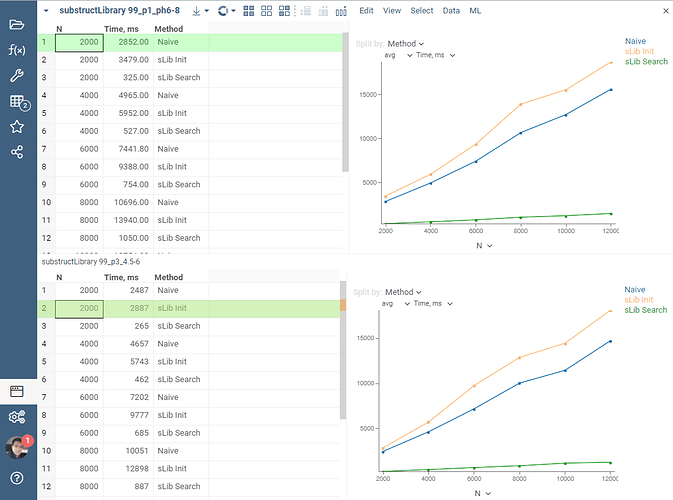 It’s clear how faster the substructLibrary-based search is compared to a graph-based one. 10x speed-up is a consistent observation on both 99_p3_4.5-6.csv and 99_p1_ph6-8.csv. We also see that the initialization time of the library is linearly dependant on the dataset size being indexed, and is roughly comparable in time to just a single graph-based substructure search.

These numbers are already great, yet there is a good room for improvements in going parallel and enabling library construction using pthreads via WASM. In fact, the infrastructure for that is already in-place, and we are already figuring out the details of making these threads work efficiently on WebAssembly.

Some plans for the future versions of Chem:

Please let us know of the other possible improvements to the cheminformatics functionality shipped via the browser, as well as whether you’d want to see more microbenchmarks from the Datagrok team. We are also going to implement an advanced benchmark based on the summary.

This is a follow up on a feature currently in design purposed to dropping incompatible coordinates of molecules.

One may want to drop the given coordinates and just render the molecule through smiles. But if there is such a scaffold which has coordinates incompatible with rdkit coordinate system (done by hand, gotten from a non-rdkit util, etc.), it first needs to be converted (through smiles) to the “default coordinates” of RDKit, then it may still be a scaffold to which other molecules may be aligned to.

We’ve noticed though that, in case the hand-made coordinates are given for a scaffold, there is a strong reason for having them be aligned in that original way for chemists. In such case, setting the regenerate-coords on such scaffold column may be just a fallback, but not a permanent solution (without fixing the actual coordinates by hand).

However, it isn’t clear how to simplify the scheme in case the scaffold is given in a coordinate system incompatible to the molecule column being aligned:

Check this short gif showcasing new features and give them a try at Datagrok!

RDKit-based structure depiction is now completely integrated with the platform: 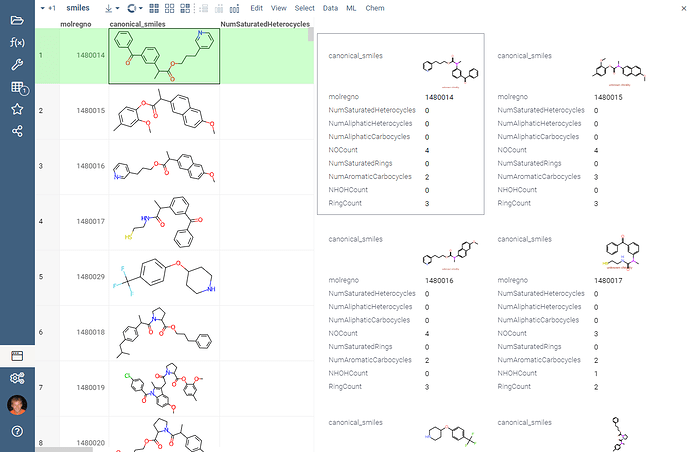 Recently introduced value comparators could of course be used for cheminformatics purposes as well. In the picture below, a trivial comparator based on the SMILES length is used to roughly order the molecules by complexity. All visualizations pick it up automatically. 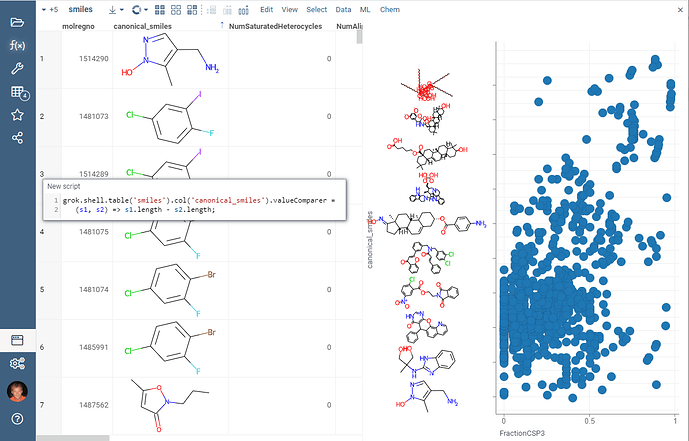 “Save as SDF” function is now exposed in the main “save as” menu. At the moment it simply exports the first structure column and all other columns as properties, but we will add options as well: